Oh god.
It's almost been a month since I've post ANYTHING. And I actually don't have any excuses. I've just been lazy, bored, uninspired.. but mainly lazy, I'll admit that!

So, now I'm fully back. I have hauls to post, review to write and make up to put on. Let's start with this :

A couple weeks ago, as you all know, Japan got hit by an earthquake and a tsunami. As a teenager, it was hard to donate money to help, but Alicia (FunnyFace Beauty) had this really awesome idea of doing one of her Dare to Wear challenge for charity again! For each looks done by her followers on her blog, her family will donate 10$ to the Red Cross to help Japan.
Simply awesome, isn't it?

Here's what I came up with. I got inspired by a street fashion look called Yamamba, or Ganguro somtimes.. I'm not an expert, but there's a full historical aspect of one being the oldest trend that led to the other, more dramatic and all.. They're known for:
-Overwelming fake tan
-A lot of white around the eyes and on the cheek bones
-Using a lot of black eyeliner, some girls as also been seen using sharpies and paint pens
-Having over colored hair, with things stuck in it such as flowers, bow, stuffed animals, etc
-Having 'light clothes' on ...
and the list could go on... 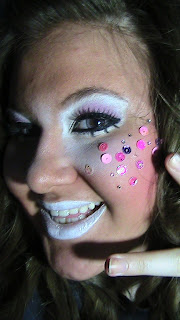 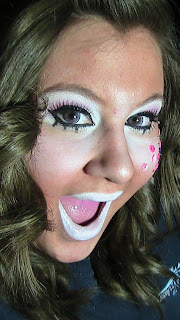 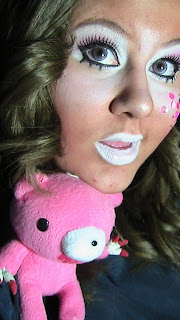 Look at the colour difference between my finger and my face on the last picture... OH man xD

Anyway. It was a really fun look to do! I really enjoyed it :) Plus, it was for a good cause... That makes it a good reason to draw some twiggies on! Right? :)

I hope you enjoyed it! Thanks for reading
Marie~~
Publié par Marie à l'adresse 3:57 AM

Marie
Just a random 18 years old french speaking girl with the dream of being a full time make up artist. On my blog you'll find my thoughts and opinions on products, hauls, tips and tricks on make up and looks right out of my creativity. Please, enjoy :D

marielovesmakeupblog@gmail.com is the way to go!

Looking for something specific?

Where Else to Find me :D